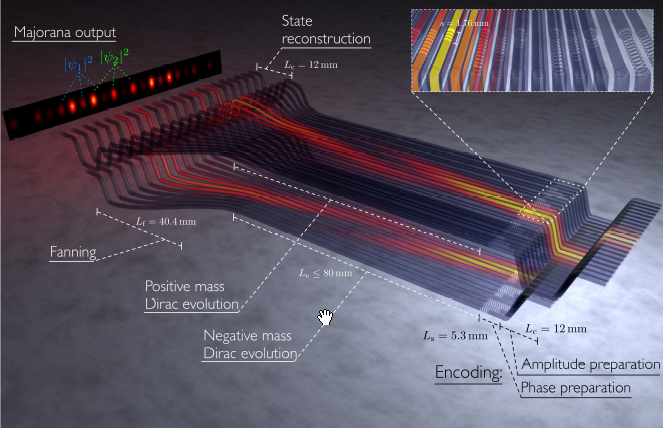 Experimental scientists have simulated forbidden physics using light in a waveguide chip, following a theoretical proposal by CQT researchers. The work appears in the 20 May issue of Optica. This graphic from the paper presents details of the experimental setup and the predicted light patterns.

Forbidden physics has been seen in an experiment – sort of. CQT researchers and collaborators in Germany, Austria and India simulated with light the behaviour of an impossible particle known as a "Majoranon". The work is published in the 20 May issue of Optica, an open-access journal of The Optical Society.

Simulations are a promising way to tackle hard problems in physics, such as understanding the mechanisms of superconductivity. "There is an international race to produce working simulations of complex phenomena," says CQT Principal Investigator Dimitris Angelakis, co-author of the new work.

The Majoranon is a solution of a famous equation in physics known as the "Majorana equation". The solutions of this equation are particles. One solution is thought to describe neutrinos, chargeless particles that interact so weakly with matter that you don't notice the billions of them streaming through you every minute. The other solution, however, violates the law of charge conservation. It is therefore deemed 'unphysical' and presumed not to exist.

In the new work, the particle is brought into a kind of virtual existence. Dimitris, who is also an Assistant Professor at the Technical University of Crete in Greece, and his group realised a few years ago that it should be possible to simulate the behaviour of the Majorana equation, including its unphysical solution, by making light or particles interact in a particular way. Specifically, they showed that the Majorana equation in one dimension of space and one of time could be rewritten as the superposition, the sum, of two Dirac equations.

If this doesn't sound helpful, you need to know that both the Majorana and Dirac equations are rules for how a particle's quantum wavefunction evolves in space and time. The Dirac equation, however, doesn't have any problematic unphysical solutions. Its most most famous solutions are simply the electron and its anti-matter cousin the positron. Indeed, when Dimitris and his collaborators were thinking about the Majorana equation in 2013, researchers elsewhere had already done simulations of the Dirac equation using ion traps. Discovering that the Majoranon could be recast as a sum of two Dirac particles made clear that a simulation should be possible. They published this insight as a theoretical proposal in Physical Review A in 2013.

"When we put the proposal out in 2013, it caught the attention of different experimental groups. The group led by Professor Alexander Szameit at the Friedrich Schiller University Jena in Germany was particularly interested. Alex and his student Robert Keil happened to be visiting Singapore at the time, so the collaboration took off very fast," says Dimitris.

The Optica paper described the implementation of this scheme in a 'photonic lattice' – a pattern of parallel channels for light fused/etched into a slab of silica using highly focussed laser beams. The dynamics of light propagating in these parallel waveguides depend on the waveguide separation and index of refraction. These parameters can be tuned to reproduce the dynamics of an electron moving in space-time according to the Dirac equation. Therefore, with two lattices in the right configuration, it's possible to simulate the Majorana equation.

"The group in Jena is one of the world's leading groups in integrated photonic chips. They implemented our idea in an amazing double lattice photonic system they fabricated for this purpose," says Dimitris. The two Dirac equations needed to simulate the Majorana equation differ in being for particles of opposite mass, realised in the experiment by having lattices with different channel spacing and light speed. The 'solutions' of the equation are read out from the patterns of the light intensity across the upper output channel (illustrated in the graphic above). The researchers could simulate 'charge conjugation', the flipping of charge of a simulated Majoranon which violates charge conservation. The light output from the channels changed in line with the team's theoretical predictions and numerical simulations. Not long after the team completed their work, another group of researchers reported another simulation of the Majorana equation in a trapped ion system.

The experiments are a proof-of-principle for experiments attempting to use simulations to explore beyond the boundaries of known physics. The forbidden physics could even become useful. In the Optica paper, the team writes "we anticipate that this first (to the best of our knowledge) explicit demonstration of unphysical operations in the laboratory will stimulate many exciting proposals that utilize the freedom of going beyond the 'physical' operations in areas such as exotic particle physics and quantum information processing."