CQT researchers and their collaborators propose simulation of a relativistic quantum field theory that has resisted full mathematical solution since the 1950s. 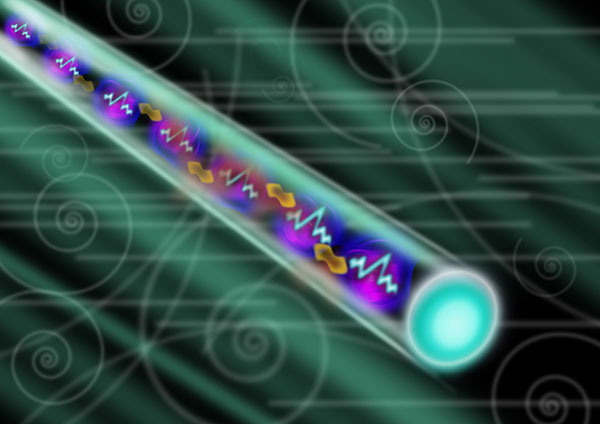 Photons could simulate the behaviour of relativistic particles predicted by the Thirring Model, a relativistic quantum field theory that has resisted full mathematical solution since the 1950s.

A major challenge for physics in the last century was connecting two of its leading theories – quantum physics and special relativity. Researchers are still grappling with the relativistic quantum theories that resulted. Writing in Physical Review Letters, CQT researchers propose a solution to one outstanding problem: how to make predictions from the Thirring Model.

The Thirring Model, which dates back to the 1950s, describes the interactions of relativistic fermions. Such particles are moving at speeds close enough to the speed of light to significantly experience time slowing and length contracting, as predicted by special relativity. Weird effects occur when the particles interact, such as the 'dressing' or changing of the particle's mass. Fermions are particles having the quantum property of half-integer spin.

But researchers only know exactly what the Thirring Model predicts for fermions that have no mass. In this case, an exact solution to the equation of motion exists. However, when the model needs a mass term – for example, to describe the interactions of electrons or quarks – the mathematical solutions are cumbersome. Predictions for the behaviour of matter at these regimes are then hard or impossible to make.

In their new paper, CQT's Dimitris Angelakis and his collaborators suggest a way to make predictions by quantum simulation.

Over the past few years, Dimitris and his team have pioneered the idea of simulating quantum systems using photons. This approach was initially surprising because photons do not easily interact, making them apparently poor candidates to simulate interacting particles. The proposed simulations use techniques from nonlinear optics to create the effect of interactions between the photons.

The team has previously shown that such photon-based quantum simulators could recreate phenomena such as the 'Luttinger liquid', an elusive state predicted in condensed matter physics, and the Cooper pairing of fermions in a superconductor.

A collaboration with mathematical physicist Vladimir Korepin of the State University of New York at Stony Brook, US, who visited CQT in 2012, has now helped Dimitris and his collaborators show that the same kind of simulator system can mimic the Thirring Model, offering a way to tackled the unsolved cases.

"He spoke maths and we spoke physics, but we managed to get something that makes sense from our collaboration," jokes Dimitris.

The team proposes that polarised photons are confined in a one-dimensional system such as an optical fibre or waveguide, together with atoms that act as a nonlinear medium. Dimitris' student MingXia Huo, a co-author on the paper, performed calculations and simulations to show how the effective interactions could be controlled by outside lasers to make the photons behave like fermions. A photon with vertical polarisation simulates a fermion with spin 'up' and one with horizontal polarisation a fermion with spin 'down'. The proposal could point the way to simulations for other exotic fields theories, such as those describing the interaction of quarks in quantum chromodynamics.

The photon-based simulator would be implementable in a table-top set-up, and Dimitris says some groups are close to having the kind of system required to test the simulation proposals.

Handily, the fact that the Thirring model has already been solved for massless particles provides a way to test the simulator's output. The unknown solutions for massive particles can then be probed by tuning optical parameters such as the photon-atom interactions which give mass to the particles..

Dimitris is a Principal Investigator at CQT and faculty at the Science Department, Technical University of Crete in Greece. He, MingXia and Vladimir carried out the work with CQT PI Leong Chuan Kwek and Darrick Chang from the Institut de Ciencies Fotoniques (ICFO) near Barcelona, Spain. MingXia is a final-year PhD student co-supervised by Dimitris and Kwek.