The group of Principal Investigator Travis Nicholson has adventured into a new group of the Periodic Table, realising the first magneto-optical trap for indium 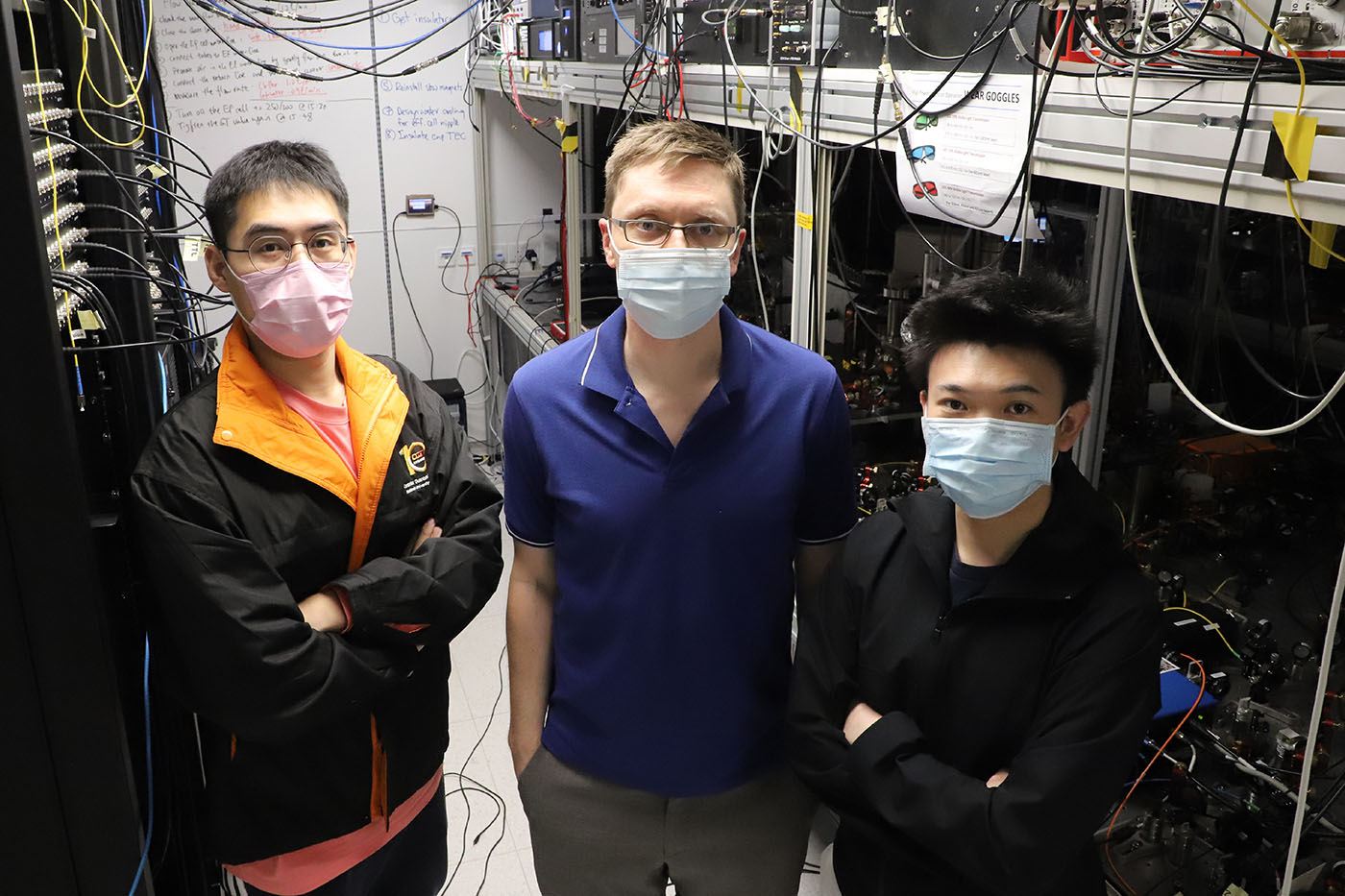 From left, group members Yu Xianquan, Travis Nicholson and Mo Jinchao. The group has become the first to trap and cool indium atoms.

Of the 118 known elements in the periodic table, only a few have been explored in ultracold atomic physics labs. The group of Principal Investigator Travis Nicholson have entered new territory, becoming the first to trap and cool indium atoms. What’s more, their work is the first demonstration of magneto-optical trapping for Group III atoms, which can offer interesting properties for quantum experiments.

“This is just the beginning – just demonstrating that indium can be trapped and cooled shows that it is a viable species for ultracold research,” says Travis, on the manuscript published as a Letter and Editors’ Suggestion paper in Physical Review A on 7 June. “We have seen an extraordinarily positive reaction to our work. Respected senior members of our research community have been emailing me congratulations, and the journal editor approached someone on my team at a conference specifically to tell us how much he loved our paper.” The paper was even featured as a research highlight in Nature. Travis worked on the project with PhD students Yu Xianquan, Mo Jinchao and Lu Tiangao, and former Research Assistant Tan Ting You.

When cooled to ultracold temperatures, atoms can act as building blocks for technologies such as quantum simulators, quantum processors and atomic clocks. Most ultracold atomic research has been done with Group I atoms, such as lithium and rubidium, also called alkalis, or Group II atoms, such as calcium and strontium, also called alkaline earths.

Indium, with atomic number 49, is in the main Group III of the periodic table, which is also known as triels for sharing the characteristic that its atoms have three electrons in their outermost orbitals.

Group III atoms offer exciting possibilities for quantum control due to the atoms’ properties. Like the alkali atoms, Group III atoms are expected to have magnetic Feshbach resonances. This property allows researchers to tune interactions between the particles with a magnetic field, giving precise control over quantum many-body states. Like the alkaline earths, the Group III atoms are expected to have ‘clock transitions’. Clock transitions are used in highly accurate atomic clocks and can also allow for precise probes of the internal states and interactions of atoms. Having these two properties means that Group III atoms can be probed with the precision of an atomic clock while offering the many-body control of alkalis.

Building up the project from scratch, the group took about three years to realise their magneto-optical trap for indium. “Since indium is part of a new group of atoms, we had to investigate many things ourselves,” says Xianquan, who is the first author of the paper. “Standard cooling techniques for Group III atoms have not been developed yet.”

A magneto-optical trap (MOT) uses lasers to trap and cool atoms at the same time. Critically, it utilises a ‘cooling transition’, an atomic transition between two internal energy states of the atom, to slow the atoms’ motion. Group I and II atoms have a cooling transition out of their ground state – the most stable state where atoms spend most of their time.

In the MOT, the atoms absorb photons from lasers shone at them from different directions. As the atoms transition from their ground state to their excited state, and reemit photons, transitioning back to their ground states, they lose energy. The atoms end up cooled to millikelvin temperatures, approaching absolute zero at -273.15°C.

For indium, the group had to use a different cooling transition. It is challenging to cool indium out of its ground state as the transition between indium’s ground and excited states is not closed, meaning indium does not always decay back to its ground state from its excited state. This could lead to the ‘dark states’ quantum effect where the atom stops absorbing photons from the laser, preventing it from being cooled further. The indium atomic cloud in the group’s magneto-optical trap. The fluorescence of the atomic cloud results from the scattered 410 nm and 451 nm repumpers. Image credit: Yu Xianquan

So, instead, the group cooled indium from a ‘metastable’ state. The metastable state is an excited state of an atom that has a longer lifetime than the atom’s other excited states. The group set up their MOT using a cooling transition that exists between one of indium’s metastable states and a higher energy state.

After optimising their trap parameters, the group observed a magneto-optical trap with 5 × 108 indium atoms, competitive with the traps for alkali and alkaline earth atoms, with temperatures of order 1 mK. The group’s techniques could also be applied to other Group III atoms with similar atomic structures.

“It is exciting to be working on a new particle like this,” says Travis. “Every small thing – every state, interaction, transition – has never been really talked about before in the context of ultracold science. We are still learning about the possibilities.”

Next up, the group plans to study indium interactions. “First, we will look at the Feshbach resonances. We’ve got to understand indium scattering properties to achieve a Bose-Einstein Condensate,” says Travis. Indium scattering is both experimentally and theoretically interesting, and several prominent theoretical physicists have expressed interest in collaborating on this project. “Indium has a type of interaction anisotropy that has not been studied before in ultracold gases.” Once that is complete, the group plans to leverage the novel properties of ultracold indium to realise exotic many-body states.