CQT contributed to the science and art of the new exhibition at ArtScience Museum, which runs until 3 March 2019 A view inside the exhibition All Possible Paths. Image credit: Marina Bay Sands

The Centre for Quantum Technologies has contributed to an exhibition at ArtScience Museum at Marina Bay Sands, Singapore, that marks the centenary and achievements of physicist Richard Feynman.

The exhibition, opened 20 October in a ceremony officiated by Mr Heng Swee Keat, Minister for Finance and Chairman of the National Research Foundation, will run until 3 March 2019.

All Possible Paths: Richard Feynman’s Curious Life explores all facets of the Nobel prize-winner’s life, from his deep contributions to physics to his charismatic teaching and notorious pranks.

The exhibition was produced and curated by ArtScience Museum, the Nanyang Technological University (NTU) and Nobel Museum. CQT provided scientific input and co-commissioned with ArtScience museum an artwork inspired by the notion of quantum computing. The result is an immersive installation from Malaysian artist Jun Ong called Quantum.

The artwork is included in a section of the exhibition devoted to Feynman’s contributions to physics. Taking inspiration from Feynman’s own visual way of thinking, sculptures, installations and photographs by 12 contemporary artists are presented to "articulate the uncanny quantum world in a visual way".

Feynman was among the first to see the potential for quantum computing. Noting how difficult it is to calculate what’s happening in physical systems, he famously said in 1981: “Nature isn't classical, dammit, and if you want to make a simulation of nature, you'd better make it quantum mechanical, and by golly it's a wonderful problem, because it doesn't look so easy.”

Showing how far this idea has gone, the first item in the exhibition is a quantum computing chip donated by the quantum computing team at Google. The group is one of a handful at big tech companies and startups racing to build this new kind of computer.

The CQT group of Dimitris Angelakis collaborates with the Google team, and the 9-qubit chip on display at ArtScience Museum was hand-carried to Singapore by Pedram Roushan, a Google quantum electronics engineer, when he visited CQT to give a colloquium and public talk in March 2018.

Jun Ong, who is based in Kuala Lumpur, Malaysia, also visited CQT – spending one day with us in May to learn about quantum computing, tour the Centre’s research labs and present to CQT staff.

Trained as an architect, Jun is interested in pairing artificial light and technology. He has created spite-specific installations around the world. He was nominated for Best in Spatial Art at the Media Architecture Biennale 2016 in Sydney, Australia.

His new work Quantum makes use of lasers and mirrors in a darkened room to create continuous and continuously changing laser paths. His idea is that viewers experience the distortion of dimension and spatial logic, as created by the quantum phenomenon known as entanglement. 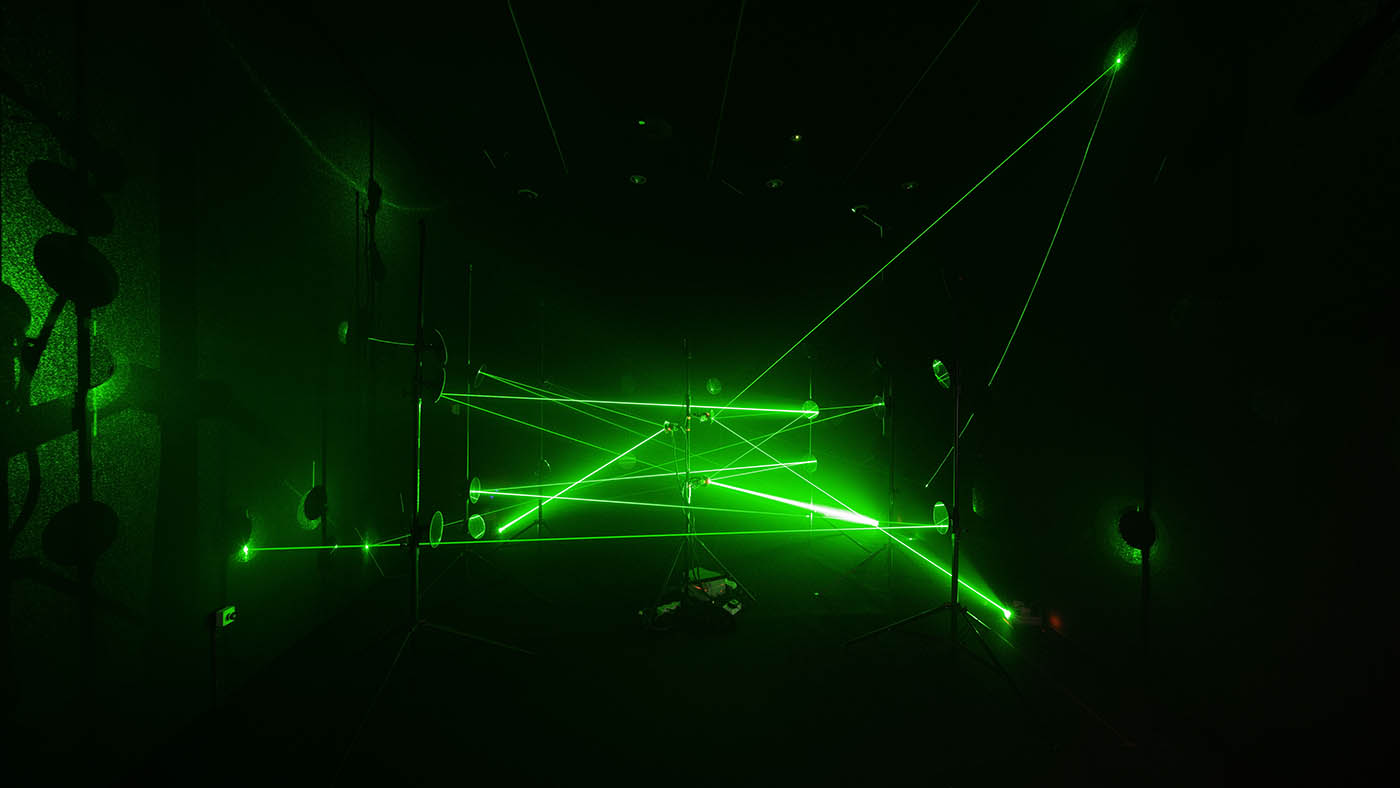 “The curatorial direction of All Possible Paths is bold and unique, just like Feynman's science...It is an exhibition that epitomizes our identity as a museum where art and science meet,” said Honor Harger, Executive Director of ArtScience Museum.

The exhibition was planned in conjunction with a conference held at NTU’s Institute of Advanced Studies, 22-24 October, to celebrate the centenary, with speakers including Feynman’s daughter, Michelle Feynman, Feynman’s former students and Nobel laureate Frank Wilczek.

CQT’s Director Artur Ekert was also a speaker at the conference, on the topic on quantum computing. He says “It was because of Feynman's lectures that I decided to study physics. It was almost an intellectual transformation, seeing how even difficult physics could be made so clear and fun. I hope that visitors to ArtScience Museum’s new exhibition get to experience some of this feeling.”