CQT PhD student Christian Gross (pictured) helped to simplify the creation of a quantum gas in this setup, developing a method that could make life easier in other labs too. Details of his work with coauthors Jaren Gan and Kai Dieckmann appear in the journal Physical Review A. 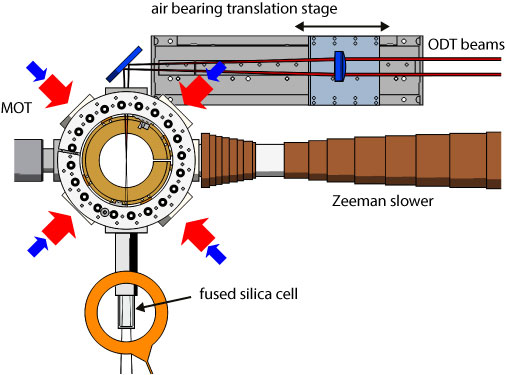 A schematic overview of the apparatus used to create a good-sized sample of quantum-degenerate lithium molecules. Credit: Adapted from Phys. Rev. A 93, 053424 (2016)

Christian Gross, Jaren Gan and Kai Dieckmann describe in a paper published 26 May in Physical Review A how they used a 'crossed optical dipole trap' to control millions of cold lithium-6 atoms throughout an experiment, achieving with one trap what would typically take two or more.

"It's a creative way to do it," says Christian, for whom the work will form part of his PhD thesis.

Researchers first realised some 30 years ago that it would be possible to cool atoms using laser light. In simple terms it works by conservation of momentum at the particle level: an atom moving into a laser beam absorbs light particles that slow it down in that direction. A few Nobel prizes have been won thanks to the technique.

Laser cooling is now in common use in quantum labs around the world – but it's still not an easy thing to do. Cold atoms labs are typically crammed with equipment: lasers, lenses, mirrors, magnetic field coils, vacuum systems and computer controls.

"In general as these scientific machines get more and more complicated, there is a need to simplify," says Kai, Principal Investigator on the lithium project.

Creating a cloud of cold atoms involves many steps. First some atoms are released into a chamber from which all the air has been sucked out. The atoms, produced by heating a sample of the element, are passed through a 'Zeeman slower' where magnetic fields start to lower their temperature.

After the Zeeman slower, the optical trapping begins, going through four steps (see figure). First, the atoms are loaded into a magneto-optical trap (MOT), where the interplay of a magnetic fields and intersecting laser beams captures the atoms. Here the atom cloud is cooled and compressed by red and UV laser light.

Lithium is traditionally difficult to cool. Kai's group developed an innovative technique for lithium using UV to do narrowband cooling. As the atom cloud gets colder and denser, the atoms can be more efficiently captured into an optical dipole trap (ODT).

The captured atoms are then moved out of the MOT and into a fused silica cell. Once in this science cell, the atoms are cooled further and experimented on. High-powered laser beams are needed to trap and transport the atoms in these phases. The lasers act like optical tweezers, with the atoms tending to concentrate where the light is most intense.

"Usually you need different trapping geometries for different stages. We modify the scheme so we can use the same one all the way through," explains Christian. They split the laser into two beams that cross at a narrow angle – showing this can be used not just in the traps at each end but, against expectations, for the transport step too.

Before they did it, people had been uncertain if crossed beams could be controlled precisely enough for the atoms to be well contained. "The nice thing is that it is working well in a stable way," says Christian. What's more, the atom cloud is rounder by this method than with others, which often lead to cigar-shaped clouds during transport. The crossing point of the beams is controlled by a lens that slides along an air-cushioned track.

In the paper, the researchers report that they could load 8 million lithium-6 atoms into their crossed optical optical trap, move them 25cm in less than a second, and cool the atoms enough that they form pairs and settle into a molecular Bose-Einstein Condensate – when the molecules all occupy the same quantum state, known as degenerate, and start behaving as one. The final temperature was 60 billionths of a degree above absolute zero (60nK).

The team's goal is to investigate the properties of the lithium molecules. Lithium, with just three electrons, is one of the simplest elements. Experimental data could constrain the many theoretical calculations done with lithium as a model element. "The team did a fantastic job. The current setup with its healthy atom numbers is an ideal platform for these studies," says Kai.