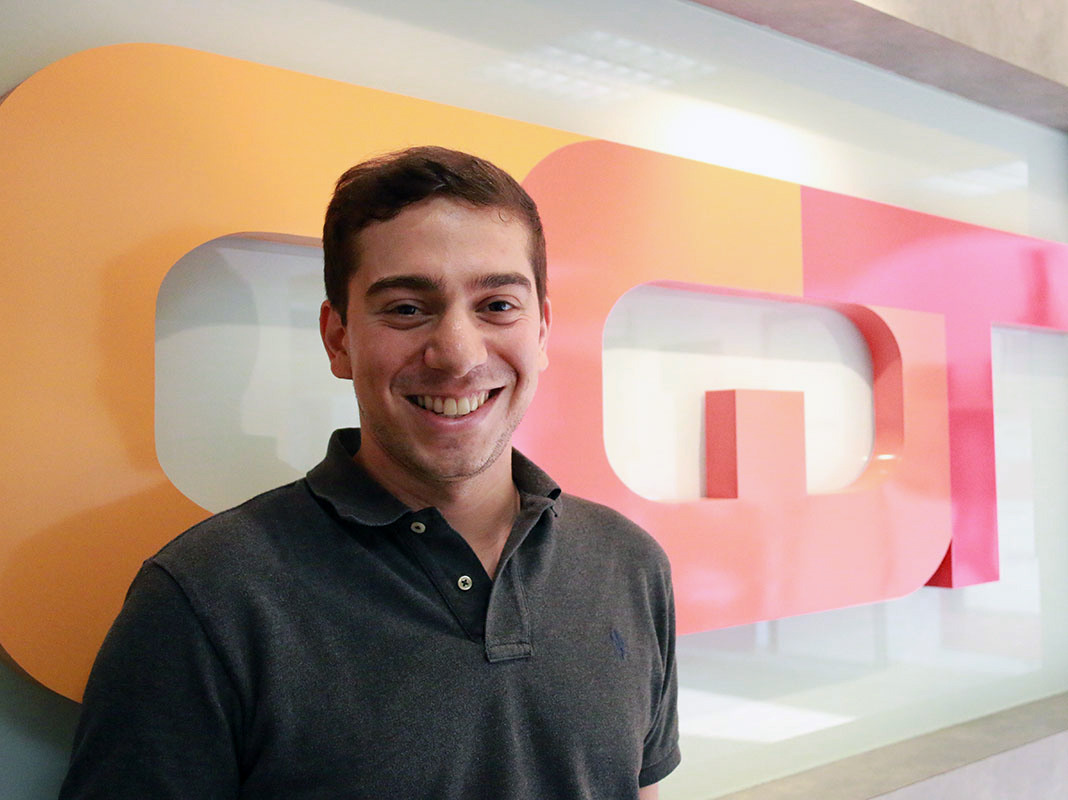 During his PhD research into the promise of quantum devices, CQT student Alexandre Roulet and his coauthors found new potential in systems that use atoms as quantum mirrors. The work is published in Physical Review A.

Look into a mirror and you take for granted that the image you're seeing is reflected straight back at you. But when mirrors are quantum, you can't assume a reflection is instantaneous. That's the finding of CQT researchers studying the behaviour of microscopic systems made of quantum objects.

The team led by CQT Principal Investigator Valerio Scarani is interested in the idea that quantum mirrors might be set into superpositions or entangled with each other, opening new possibilities for experiments.

The conclusion, published in February in Physical Review A, is important because it shows that quantum mirrors can be used to do experiments in the regime of cavity quantum electrodynamics (CQED). "We find that we can completely recover cavity QED," says Alexandre Roulet, a CQT PhD student and coauthor on the paper.

CQED is a workhorse of experimental quantum physics. An atom placed between two almost perfect mirrors will interact more strongly with light than it usually would. This is because the light field is trapped in the cavity, too.

Such souped-up interaction puts CQED setups at the heart of proposals that need photons to interface with atoms, for example to deliver quantum bits of information. Strong light-matter interactions can also be achieved with atoms trapped near waveguides (which are channels to contain light), with superconducting circuits and with quantum dots.

In 2012, scientists at the Institut de Ciencies Fotoniques in Barcelona, Spain and the Institute for Quantum Information and Matter at Caltech in the US published in the New Journal of Physics a novel proposal for "Cavity QED with atomic mirrors". This set out the idea that a chain of atoms trapped in a waveguide could play the role of classical mirrors.

When the spacing of the atoms and the strength of their interaction with light in the waveguide is carefully tuned, the chain can reflect light perfectly. Two such chains can therefore form a cavity between them, but with the extra possibilities opened up by the mirrors being quantum objects themselves. For example, quantum mirrors might be put into superpositions or entangled states. What new functions are possible then?

Alexandre is doing his PhD in Valerio Scarani's group on just this kind of problem. "There are lots of proposals in the literature for quantum devices. Our idea is to learn what kind of tools are available, then starting from the physical systems, work out what we can do with them," he says. "The promise is that such devices can be integrated on chips, be more efficient than their classical equivalents and lead us to new physics. But there are lots of open questions."

When Alexandre, Valerio and their co-authors Pierre-Olivier Guimond and Huy Nguyen Le considered the proposal for atomic mirrors, they realised there was a regime not considered in the original paper.

It's typical in CQED to make what's known as the 'Markovian assumption', which says that you can assume a photon in the cavity travels so fast and is reflected so quickly by the mirrors that these timescales are unimportant. You can work out how the atom interacts with the light without including the travel and reflection time.

The assumption works well in the traditional case. The calculations match what's observed. An atom in a cavity exhibits 'Rabi oscillations' – it flips periodically between a lower and higher energy state as it absorbs and emits photons into the cavity. If the mirrors were perfect, this would continue forever.

An atomic mirror's behaviour depends on the number of atoms it contains, the atoms' spacing, and the strength of the atom's interaction with the light (adjusted, for example, by moving them closer to the waveguide). Calculations using the Markovian assumption identified the mirror parameters that give decaying Rabi oscillations. The CQT researchers came up with new equations that include the response time of the atomic mirrors to photons in the cavity and the travel time of a photon between them. These equations predict another set of mirror parameters that will produce ongoing oscillations.

The CQT team are all theorists, meaning the calculations are the end-point of this work for now, but they hope to test the ideas in collaboration with experimentalists soon.

The team can also now focus on their bigger goal of using the quantum mirrors in quantum ways. "We are ready to attack the real challenges of superposition and entanglement," says Valerio.