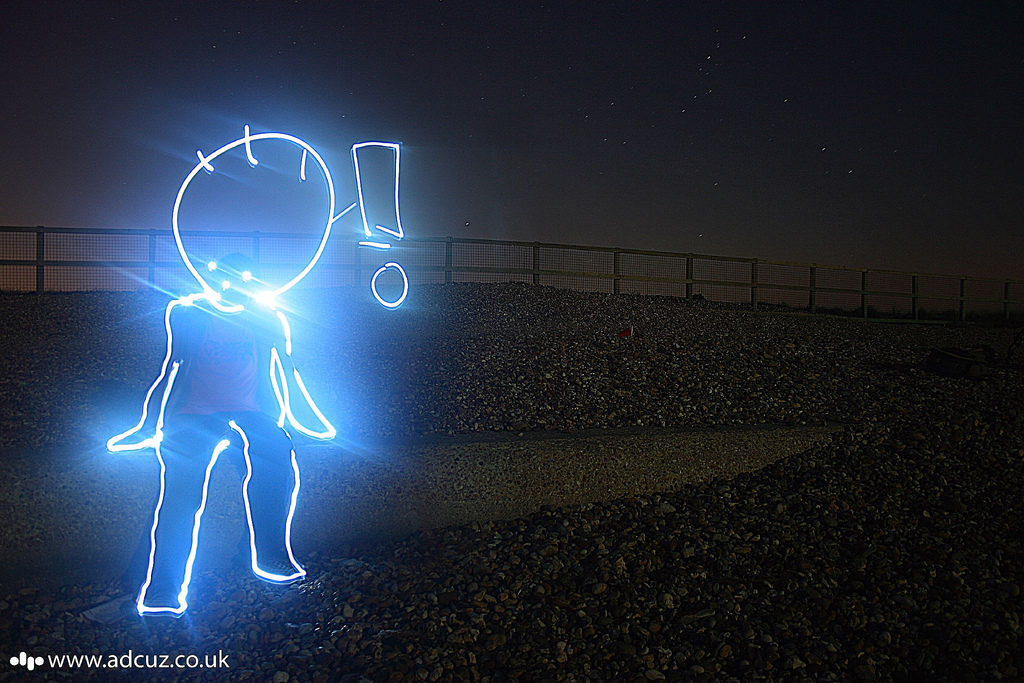 The unexpected observation of a flash of light in an experiment a few years ago led CQT researchers and their collaborators to a new scheme to efficiently generate a train of optical pulses, dubbed 'superflashes'. Image: Adam Currie, https://www.flickr.com/photos/adcuz/, CC-BY-NC-ND 2.0 This figure adapted from Phys. Rev. Lett. 115, 223601 (2015) shows the setup (top) that the team used to produce the sequence of superflashes (bottom). The AOM and EOM are an acoustic- and electro-optic modulator respectively.

After seeing an unexpected 'superflash' in a cold atoms experiment, a team including CQT researchers has worked out how to harness the phenomenon to make a sequence of optical pulses. The discovery could lead to new technology for telecoms and other applications.

CQT Visiting Research Associate Professor David Wilkowski at Singapore's Nanyang Technological University and his colleagues have published the details in a pair of papers in Physical Review Letters. They have also submitted a patent application on the approach.

David's group first saw the flash when the team was investigating how ultra-cold atoms scatter light a few years ago. David, who is a member of CQT's exploratory initiatives group, is also a researcher at the University of Nice and was then in France.

"I remember that it was by mistake. We had a detector in front of the laser. We turned off the laser and there was this flash," he says. Since then they have worked out the theory behind the effect, allowing them to design new experiments that give precise control over the flashing. In particular, they have discovered the superflash to have an unexpectedly high amplitude.

Making light work of it

For these experiments, the team creates a cloud of some 100 million Strontium atoms, cooled to within a few microKelvin of absolute zero. They look at what happens to a laser beam shone through the cloud.

The laser's frequency is tuned to close to a frequency the atoms absorb, and the atom cloud is just large and dense enough that the light is likely to interact with the atoms, but one atom by one atom only(in physics terms, the medium is described as dilute but optically thick).

Typically, you would expect that some of the light is absorbed, then reemitted in random directions. That scattering means that, when you measure how much light is transmitted along the path of the beam, you see almost all of it being lost.

The surprising thing is that when the laser is turned off abruptly, there is a bright flash along the direction of the beam, with an intensity up to four times that of the original light. This flash is also much shorter than the average lifetime of an excited state: it lasts around 2 microseconds, whereas the excited state's lifetime is 21 microseconds.

In their first paper, published November 2014, the researchers showed the superflash occurs because of cooperative effects among the atoms: there's a strong phase rotation of the forward scattered field, boosting the light's intensity without violating conservation of energy.

In their latest paper, published November 2015, the team reports having created a train of superflashes. Instead of triggering the flashes by switching the laser on and off, they were able to make the pulses by flipping the phase of the incoming laser beam. This was done by simply adding an electro-optical modulator into the beam-line.

The pulses have a short repetition time, high intensity contrast and are generated with high efficiency. For some parameters almost all of the incoming laser energy is captured in the pulses: even emission from single atoms is 'quenched' in favour of the cooperative dynamics, an unexpected balance in a dilute medium.

The setup achieves a pulse rate equivalent to some 400,000 flashes per second of red light, around Strontium's absorption of light of wavelength 698nm. The team describes the setup in their paper as a "proof of principle", noting that pulses on picosecond timescales (THz rates) could be possible with other more common elements. For example, they suggest the same technique could work in samarium-doped optical fibres, emitting in the telecommunication band. The approach differs from some other techniques to produce optical pulse trains in being highly efficient and offering full control over the timing of the pulses.