This experiment at the Centre for Quantum Technologies in Singapore has made a record measurement of entanglement – approaching the quantum limit with extreme precision. Photo Credit: Alessandro Cerè / CQT, National University of Singapore

An experiment at the Centre for Quantum Technologies (CQT) has pushed quantum weirdness close to its absolute limit.

Researchers from CQT and the University of Seville in Spain have reported the most extreme 'entanglement' between pairs of photons ever seen in the lab. The result was published 30 October in Physical Review Letters, where it is highlighted as an Editors' Suggestion.

The achievement is evidence for the validity of quantum physics and will bolster confidence in schemes for quantum cryptography and quantum computing designed to exploit this phenomenon.

"For some quantum technologies to work as we intend, we need to be confident that quantum physics is complete," says Poh Hou Shun, who carried out the experiment. "Our new result increases that confidence," he says.

Entanglement says that two particles, such as photons, can be married into a joint state. Once in such a state, either particle observed on its own appears to behave randomly. But if you measure both particles at once, you notice they are perfectly synchronized.

Experiments since the 1970s have been collecting evidence that quantum predictions are correct. Recently an experiment in the Netherlands became the first to do away with all assumptions in the data-gathering.

Technically known as a 'loophole-free Bell test', the experiment leaves no wiggle room in meaning: entangled particles do behave randomly, and they synchronize without exchanging signals. (The results appeared in Nature on 21 October, doi:10.1038/nature15759). 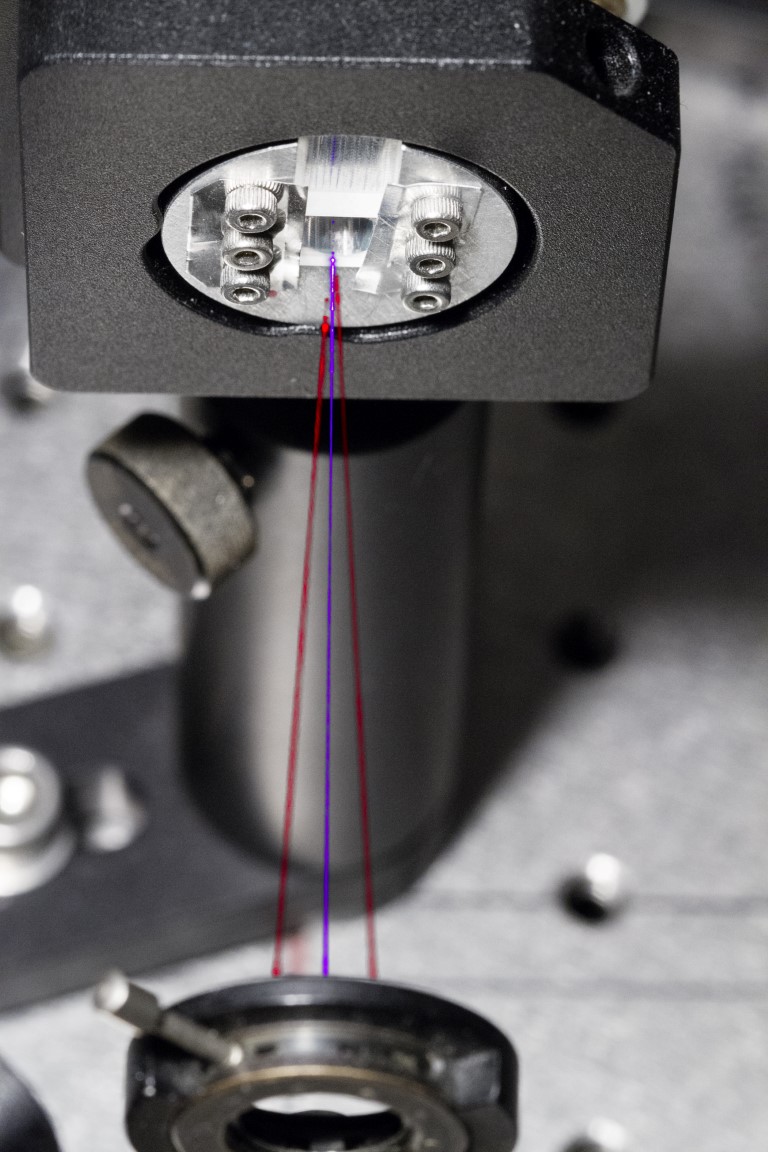 To create entangled photons, a laser (appears purple) is shone at a crystal that splits some of the photons into two. These photons emerge entangled. The red laser is not part of the experiment but shows the path the entangled photons follow. Photo Credit: Alessandro Cerè / CQT, National University of Singapore

In the lab in Singapore, Hou Shun and his colleagues also performed a Bell test. But instead of closing loopholes, their setup pushes the entanglement towards its theoretical maximum.

They make entangled photons by shining a laser through a crystal. The photons interact with the crystal in such a way that occasionally, one splits into two and the pair emerges entangled. The team control the photons with an array of lenses, mirrors and other optical elements to optimize the effect.

The researchers looked at 33.2 million optimized photon pairs. Each pair was split up and the photons measured separately, then the correlation between the results quantified.

In such a Bell test, the strength of the correlation says whether or not the photons were entangled. The measures involved are complex, but can be reduced to a simple number. Any value bigger than 2 is evidence for quantum effects at work. But there is also an upper limit.

The record result also rules out a proposed extension to quantum theory. Earlier this year, Alexei Grinbaum with CEA in France put forward a model in which quantum physics is just an effective description of a more fundamental theory. He calculated a new limit on the correlation measure using tools from information theory. The calculations considered how much information an observer can hold about a two-particle system, and gave a limit on the correlation measure sitting just 0.1% under the quantum limit.

"You need a very precise measurement to be able to distinguish the quantum limit, and that was our achievement," says Christian Kurtsiefer, a Principal Investigator at CQT and co-author on the paper. The team's result exceeds the Grinbaum limit by enough to rule out the model behind it.

The group heard about the Grinbaum limit from Adán Cabello of the University of Sevilla. "He came to us and said have you heard of this bound, how close are you? That started this experiment," says Christian. Adán is a coauthor on the paper. Former CQT PhD student Siddarth Joshi (now at the Institute for Quantum Optics and Quantum Information in Vienna) and current CQT research fellow Alessandro Cerè also contributed to the work.

Entanglement doesn't allow faster-than-light communication, but it can be used for secret messaging and to speed up some calculations. Checking that it's possible to reach the quantum limit for correlations is valuable for these applications: their security and reliability depends on this limit being fundamental.