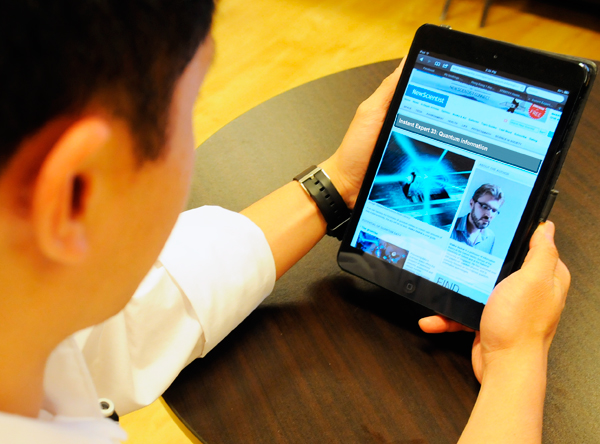 What does it take to be an expert in quantum information? CQT Principal Investigator Vlatko Vedral can legitimately call himself one as a Professor with more than 15 years' experience in research and over 200 scientific papers to his name. Now he's offering others the chance to become an 'instant expert' through a guide he has written for New Scientist magazine.

Vlatko's eight-page Instant Expert guide to quantum information is published 03 July as a pull-out supplement in the weekly popular science magazine, which has a worldwide readership of some three quarters of a million people.

The guide includes a timeline of key ideas in quantum information, a rundown of the advantages and challenges of the different technologies being tried for building quantum computers and an overview of what one might do with them, from number crunching to precision measurement.

"There has been a huge change in attitudes in the last 15 years. Back then, quite a lot of people doubted that large scale quantum computers were even possible. Now most of us agree that they are inevitable! I am happy because I was one of the early believers and that intuition is now turning out to be right. The quantum computer is just around the corner and I want to inform as wide an audience as possible about the range of technologies being developed and the number of problems that can be tackled with quantum technologies," says Vlatko.

As to how much expertise you'll have after reading his guide, "the level is definitely aimed at a discussion in the bar," says Vlatko.

Vlatko, who holds a joint appointment at the National University of Singapore and the University of Oxford, writes regularly about quantum information for a popular audience. His recent articles have appeared in New Scientist, Scientific American and Nautilus. He is also the author of Decoding Reality.