Proposed experiment would remove assumptions from a test of quantumness that has applications in cryptography. 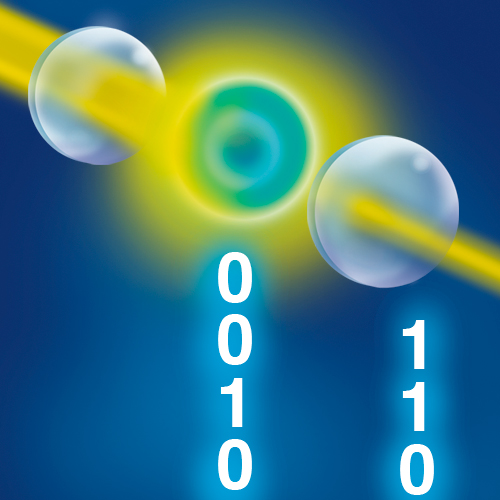 Efficient measurements on atoms and light beams could enable a loophole-free Bell test, as described in a paper published 3 July in Nature Communications. The results of such a test would have applications in cryptography.

CQTians collaborated with researchers from Austria, Spain and Brazil on the proposal. Pictured from left to right during a meeting in Singapore are co-authors Jiri Minar, Mateus Araujo, Marco T. Quintino, Daniel Cavalcanti, Marcelo Franca Santos, Colin Teo and Valerio Scarani. (Marcelo Terra Cunha, not pictured, is also a coauthor).

Researchers trying to take the assumptions out of a key test of quantum entanglement have a new experimental route to consider, thanks to a proposal from CQT scientists and their collaborators published 3 July in Nature Communications. Success in performing such a 'loophole free Bell test' would not only reinforce confidence in quantum theory but also enable some remarkable technology.

Entanglement is the property of two particles sharing a state such that their behaviours are instantly correlated whatever the distance between them. This mysterious connection has long been considered a distinguishing feature of quantum physics. It has also been shown to be useful: quantum cryptography harnesses entanglement to allow two parties to share a secret key they can use to encode their messages.

One way of confirming the existence of entanglement between any types of particles is a 'Bell test', named after John Bell who first proposed the criterion used in the test. Several instances of Bell tests have been conducted since the first one was reported in 1982, but they all suffer from either of two loopholes: the 'locality loophole' or the 'detection loophole'. The setup proposed by CQTians Colin Teo, Jiri Minar, Valerio Scarani and their collaborators in Austria, Spain and Brazil would combine features of both types of experiments to vanquish both loopholes at once.

In a Bell test, researchers try to catch and measure the properties of pairs of entangled particles after the particles have been separated. The detection loophole arises because researchers can't catch all the particles they create: they have to assume the ones they do catch are representative. This loophole afflicts experiments using pairs of entangled photons because photons get lost in transmission and at inefficient detectors.

The locality loophole arises when the team can't get the particles far enough apart, or measure them quickly enough, to rule out the possibility that one particle sent a message to the other about how to behave. Instead, the scientists have to assume there was no communication. This loophole has come up in experiments with entangled atoms.

In general scientists don't like assumptions, for the good reason that they might prove to be wrong. "When you assume, you make an ass out of you and me," as the writer Oscar Wilde once said. But there's more to it. "To quote John Bell, I don't believe that quantum physics will collapse the day that detectors become efficient enough to close the loophole. A loophole-free Bell test would be an achievement for the field, a point where you can say it's done, but really I'm interested because when you reach that point, the test becomes a tool for technologies," says Valerio. He and others have developed the idea of 'device independence' in quantum cryptography. Performing a loophole-free Bell test on entangled particles used to distribute a secret key can provide a guarantee that the key is secure, without you knowing anything about the devices that produced the particles. The remarkable implication is that you could even purchase your cryptography apparatus from an enemy. The test can also serve as a guarantee of randomness, for creating sequences of random numbers useful in applications ranging from simulation to gambling.

There are many roads to a loophole-free Bell test. Groups around the world, including at CQT, are trying to close the loopholes in experiments on entangled photons, which produce good and easy-to-characterize entanglement, by the 'brute force' approach of improving the collection and detection efficiencies. Another option consists in looking into systems whose detection is already known to be efficient: the so-called 'homodyne' measurement for light beams, or the measurement of energy levels for atoms and ions. The price to pay is that entanglement becomes harder to produce and characterize. "I am prepared to believe that the first loophole-free Bell test will be done by brute force, but for future technological advances the second kind of scheme may be more practical," says Valerio.

The new scheme belongs to the second kind. The Bell test is performed on the entangled state of an atom and a light beam. The atom is confined in a cavity formed by two closely-separated mirrors, where it interacts with an incoming laser beam. The energy level of the atom becomes correlated with the intensity and phase of the outgoing light beam. This beam undergoes homodyne measurement, whose efficiency helps to close the detection loophole. The locality loophole can also be closed because the light signal can be routed quickly down optical fibre to cover a long distance.

Homodyne measurements had been considered previously, but researchers had not been able to come up with a state for the atom-cavity interaction that was both compatible with Bell testing and possible to make. "Our work is quite surprising because the states we propose are not very complex but are still quite useful," says Colin, the paper's first author.

The team used parameters from recent experiments to show that the proposal would be feasible, with the proviso that a type of quick measurement known as photoionisation can be adapted to work for an atom in a cavity. Such a measurement takes around one microsecond. The laser beam would then need to be measured around 300 metres away, and could be routed down optical fibre. The team calculate that they could make a loophole free Bell test with reasonable detection and transmission efficiencies.

Of the CQTians in the team, Colin is a PhD student, Jiri and Daniel are Research Fellows and Valerio is a Principal Investigator and Professor. Daniel is also affiliated with ICFO in Barcelona, Spain. They are pictured above with their collaborators on an occasion when all but one visited CQT.