Artur Ekert has co-authored with Oxford physicist David Deutsch an article looking “Beyond the Quantum Horizon”. What lies beyond the boundary of knowledge? Artur and David chose this famous 19th Century illustration, the Flammarion engraving, to accompany their article "Beyond the Quantum Horizon".

The September special issue of Scientific American tackles ideas "Beyond the Limits of Science". Quantum physics, with the perceived limits on knowledge enshrined in its uncertainty principle and inherent randomness, is a subject ripe for inclusion.

In an invited feature, CQT Director Artur Ekert and his collaborator and co-author David Deutsch, a physicist at the University of Oxford, UK, eloquently make the case that quantum physics has revealed not new limits, but new possibilities. An audio interview with Artur accompanies the article. In the feature, in they write:

"Throughout the history of the field, physicists often assumed that various kinds of constraints from quantum physics would prevent us from fully harnessing nature in the way that classical mechanics had accustomed us to. None of these impediments have ever materialized. On the contrary, quantum mechanics has been liberating. Fundamentally quantum mechanical properties of objects, such as superposition, entanglement, discreteness and randomness, have proved not to be limitations but resources."

In particular, quantum physics is now known to enable new forms of communication and computation. The article makes clear how quantum computation can differ from classical computation with a simple example: an operation that is the square root of NOT. 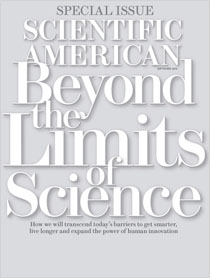 In an ordinary computer, a NOT operation swaps a bit of information that is 0 to 1, or vice-versa. There is no intermediate possibility. But in a quantum computer, one can invent an operation that has to be performed twice for a 0 to become a 1, or a 1 a 0. "By expanding our repertoire of such elementary computations to include ones such as the square root of NOT, quantum physics will allow mathematicians to poke their head through a barrier previously assumed to exist in the world of pure abstractions." The idea is echoed in a 19th Century wood engraving that accompanies the article (pictured above). The authors also argue that 'bad philosophy' is to blame for the thought that quantum physics would impose limits in the first place.

Artur has been Director of CQT since the Centre was founded in December 2007. He is also Lee Kong Chian Centennial Professor at the National University of Singapore and a Professor at the University of Oxford's Mathematics Institute. He traces back to his time as an Oxford PhD student his friendship and scientific collaboration with David Deutsch, who is known for his deep thinking about quantum computing. David Deutsch has also written two popular physics books, The Fabric of Reality and The Beginning of Infinity.

The full article "Beyond the Quantum Horizon" can be read on the Scientific American website (subscription required). The audio interview is here: Quantum Buzzkill: Is the Uncertainty Principle Overrated?.