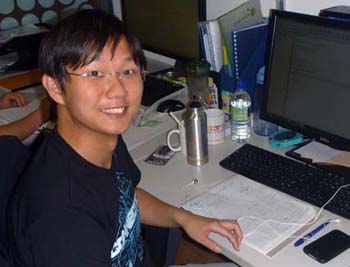 CQT PhD student Colin Teo is one of the bright young researchers selected to participate in the prestigious Lindau Meeting this year. He and three other CQTians will join Singapore President Tony Tan in attending the event in Germany.

CQT PhD student Colin Teo is one of eight young scientists from Singapore selected to attend the 62nd Lindau Nobel Laureate Meeting, 1-6 July 2012. Colin will not only attend this prestigious scientific conference but also participate as a speaker in a panel alongside a Nobel laureate, as Singapore's Straits Times newspaper reported on 23 June.

The first Lindau Nobel Laureate meeting was held in 1951, and the series has grown into an international event that brings students together with Nobel prize-winners: "a globally recognised forum for the transfer of knowledge between generations of scientists". For this year's event, which is focused on physics, more than 25 Laureates and 580 young researchers will converge on the lake-side town of Lindau, Germany.

An estimated 20,000 students apply to participate each year, with students going through multiple stages of selection. Colin's nomination was supported by a recommendation letter from his supervisor, Valerio Scarani. "The Singapore delegates, who were recommended by research institutes and universities, represent some of the country's brightest students and post-doctoral scientists" the Straits Times said.

Colin's speaking engagement is at a science breakfast titled "On the Brink of an Era of Quantum Technologies", starting the international day on 2 July hosted by Singapore. He will participate in the panel discussion alongside CQT's Director Artur Ekert and 1997 Physics Nobel Laureate William D. Phillips — who won a share of the prize "for development of a method to cool and trap atoms with laser light". CQT outreach manager Jenny Hogan will moderate the discussion.

Also travelling to the meeting from CQT is Principal Investigator Alexander Ling. He will give a scientific talk at an evening social function hosted by Singapore about his group's research towards a global quantum communication network — presenting the quantum satellite project that recently survived high-altitude testing.

Singapore's support for the meeting extends to the top: Singapore President Tony Tan Keng Yam is attending the Lindau Meeting with a delegation including members of Singapore's National Research Foundation, of which he was formerly Chairman. President Tan will be inducted into the Honorary Senate of the Foundation Lindau Nobelprizewinners Meetings at Lake Constance, which is working towards sustainable funding for the annual meetings.