DPM Teo Chee Hean was accompanied on his visit to the National University of Singapore by the Permanent Secretary (National Research and Development) and other VIPs.

Singapore's Deputy Prime Minister Mr Teo Chee Hean began a visit to the National University of Singapore on 11 June at the Centre for Quantum Technologies.

DPM Teo was appointed Chairman of the board of Singapore's National Research Foundation (NRF) in September 2011. NRF has a mission to strengthen Singapore's R&D through the coordination and funding of national research programmes, including the Research Centres of Excellence of which CQT was the first established. 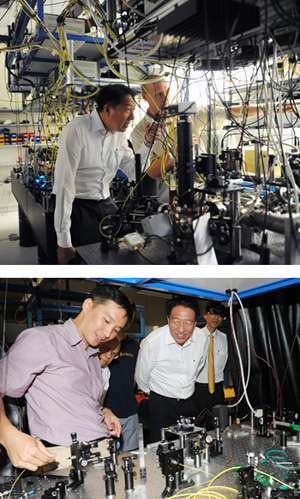 Following presentations and discussion of the research landscape in Singapore, the DPM and his delegation visited two quantum labs at CQT and the Micro and Nano-Fabrication Facility at the Graphene Research Centre.

At CQT, the delegation saw the labs of Principal Investigators Murray Barrett (pictured top right) and Alexander Ling (pictured bottom right). Murray's group works with cold ions held in miniature traps, such that the ions' states can be probed and controlled. Cold ions are one potential technology for quantum computation. Alexander's group specialises in quantum optics technologies with a particular interest in developing compact, rugged equipment. The group recently tested on a weather balloon flight some components they plan to send into space.

At the Graphene Research Centre, DPM Teo and Ms Yong Ying-I donned suits to enter the cleanroom facility. Under the guidance of Konstantin Novoselov, who won a share of the Nobel Prize in physics in 2010 for experiments on graphene and is a Scientific Advisor to the centre, DPM Teo isolated a sheet of the carbon material. The Graphene Research Centre, in the neighbouring building to CQT, was founded in 2010.

DPM Teo posted about the visit on his Facebook page. Beneath a picture of him making graphene, he commented: "Also visited the Centre for Quantum Tech at NUS - their experimental results on single atom and single photon interaction are ahead of the theory."