Proposal to get ultrafast performance from promising quantum computing technology

Researchers from Singapore and Spain have designed circuit QED schemes to take advantage of the 'ultrastrong coupling regime'. The results are published in Physical Review Letters.

CQT researchers and their collaborators in Spain have come up with a scheme to get ultrafast performance from one of the most promising technologies for quantum-powered computations and simulations. The proposal is published in Physical Review Letters. 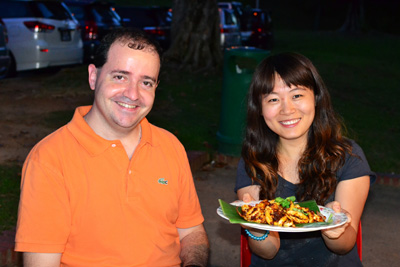 When SQUID doesn't refer to superconducting quantum interference device: Valerio (left) and Yimin (right) pictured at a group dinner enjoying the local speciality sambal sotong, which is squid of the seafood variety cooked in a red chilli sauce.

The researchers looked at a technology known as circuit QED, which has already been used for the demonstration of quantum-information processing tasks. One of the attractions of circuit QED schemes is that they involve all-electronic structures that are controllable and potentially simple to scale.

CQT's Yimin Wang and Valerio Scarani, with researchers at the University of the Basque Country in Bilbao, redesigned circuit QED qubits — the component which stores a quantum bit of information — to perform faster logic gate operations than possible to date. The researchers estimate that operation times would be improved from tens of nanoseconds in existing proposals to less than a nanosecond.

Early experiments achieved qubit-microwave coupling strengths with respect to the resonator frequency on the order of 0.001. The experiments that demonstrated ultrastrong coupling boosted this by a factor of 100. Stronger interaction enables faster manipulation of the qubits, which in turn should allow faster logic operations. Information stored in circuit QED qubits is also expected to decohere after a few microseconds, making it all the more important to get gate operations done quickly.

The usual designs for logic gates did not consider the ultrastrong regime, in which some typical assumptions that go into quantum operations no longer apply. Earlier work by Yimin, Valerio and their Spanish collaborators, Daniel Ballester, Guillermo Romero and Enrique Solano, had shown that the accuracy of existing gate schemes would decrease significantly if they are used in the ultrastrong regime.

In the new paper, the same team explicitly design for the ultrastrong regime a scheme for a two-qubit 'CPHASE' gate. To make the scheme feasible, they also had to come up with a new qubit architecture that allows better control of the qubit-resonator. The new design includes additional loops of superconductor. The theorists hope that experimentalists will soon test their scheme.

Yimin, a CQT PhD student, initiated this project after Valerio, CQT Principal Investigator, NUS Professor and Yimin's supervisor, asked her to present the 2010 experimental papers in CQT's Journal Club. At that point, the CQT group were interested in exploring the paper's theoretical implications: in the ultrastrong regime, a theoretical model known as the Jaynes-Cummings model, which is widely used in quantum optics, breaks down. Yimin then wrote to the theorists in Spain asking if they would like to collaborate on investigations of the implications for logic gates. She ended up making two visits to Bilbao last year to work on the project.