A quantum Cabinet of Curiosities

A month-long art/science collaboration at CQT has ended with the installation of a "Cabinet of Curiosities" on the Centre's sixth floor.

A lab notebook. A tie. A laser sculpture. A sealed pack of papers. These are among the objects assembled for the "Cabinet of Curiosities" that opened at Singapore's Centre for Quantum Technologies on Thursday 19 April. The cabinet results from a month-long art/science collaboration initiated by visiting artist Grit Ruhland.

A time-lapse video of the construction of the Cabinet of Curiosities art installation at the Centre for Quantum Technologies, ending with the opening party. To see pictures from the month-long artist residency, visit the album here. Read a full account of the art/science collaboration in the artist Grit Ruhland's diary, which describes her encounters, emotions and impressions.

Grit was selected through the 2012 NUS Art/Science Residency programme to come to CQT, having proposed the idea of the cabinet in response to an open call for applications. The concept of a Cabinet of Curiosities dates to the Renaissance era — it is what museums looked like before museums existed, displaying astonishing artefacts from art and science. Grit wanted to reinterpret the idea for a Centre of modern research. She was particularly interested in quantum research, since the science deals with concepts and objects that are mostly invisible.

But as Grit stressed in her final artist talk in Singapore — her artwork is not just the cabinet itself, rather the entire collaborative process of discussing, selecting and creating objects for display. During the residency, Grit also ran a two-parted workshop for students and gave talks at CQT and the Singapore Art/Science museum.

"It was a really good experience and I wish the residency could have been longer," says Grit. "I have a feeling I could have developed more collaborations."

For the collaborative side of the project, Grit assembled a 'Board of Directors' that comprised CQT researchers, NUS students and Singapore artists (see list below). They met four times over the month to discuss the Cabinet, selecting and creating objects that explore concepts in quantum physics and the Centre's research culture. Other members of CQT also engaged with Grit in discussion and contributed objects — from the workshop technicians who donated defective bits of equipment to be turned into a miniature city, to the researchers who were persuaded to model in clay their research models or draw qubits for the cabinet's 'Qubit Gallery' (pictured below). Grit has chronicled her interactions and experiences at CQT in an entertaining online diary.

In the diary, for example, you will learn the story of some of the stranger qubit drawings. In CQT's research field, qubit is a contraction of 'quantum bit', referring to one bit of information stored in a quantum state of, say, an atom or photon. Quantum physics allows the bit to be not only a 0 or a 1, but also somehow a 0 and 1 at the same time. The Cabinet's Qubit gallery features some standard quantum representations (such as an arrow in a Bloch sphere) and some surprising interpretations, including a cupid and a cubit (an old unit of length based on the length of the forearm). 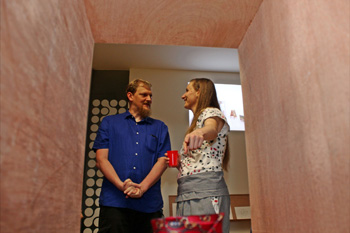 Grit Ruhland explains to CQT's Christian Kurtsiefer the story of the coiled-up tie in the Cabinet of Curiosities. Artist Isabelle Desjeux collected stories from experimental scientists at CQT about some of the unexpected low-tech tools in the laboratories. Duct tape may not be popular, but tin foil is widely used. Photo by Phyo Myat Thu.