Idea invented by CQT's Joe Fitzsimons and colleagues implemented in the lab. 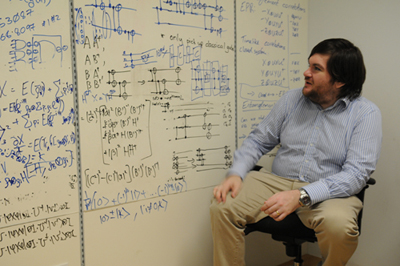 Computer data processing and storage are increasingly done in the 'cloud', connecting clients over a network to a remote and powerful server. A challenge is to ensure that clients' data stays private. Researchers have now shown that perfectly secure cloud computing can be achieved with quantum computers, which exploit the counterintuitive world of quantum mechanics. The research, conducted by an international collaboration including CQT's Joseph Fitzsimons (pictured right) is published today in Science.

The team built a quantum computer that performed computations for a client while remaining 'blind' to the data input, data processing and data output. This experiment was performed in Vienna, Austria, and implemented a scheme that Joe, formerly also of University College Dublin in Ireland, and his collaborators Anne Broadbent at the Institute for Quantum Computing, University of Waterloo, Canada and Elham Kashefi at the University of Edinburgh, UK, first described in a 2009 paper (arXiv:0807.4154).

Science highlights the result with an independent Perspective article by CQT Principal Investigator Vlatko Vedral, who is jointly affiliated with CQT, NUS and the University of Oxford. "Blind quantum computing is one of the most exciting ideas in quantum computing in the past ten years," says Vlatko.

Popular accounts of the new result appear on BBC News, New Scientist and Popular Science among others. Joe explains the work himself over on the QuantumBlah blog. Both the data and the program are encrypted in "blind quantum computing", which allows a client with no computational power to interact with a quantum server with perfect security. Image: Equinox Graphics.

In blind quantum computation, a client interacts with a remote quantum computer (a server), sending data encoded in quantum bits (qubits) and instructions for processing it. The quantum server carries out the instructions, which describe measurements to perform on the qubits, and sends back the results — but the server has no way to decipher the data or determine the net outcome of the calculation.

"Unless there is a fundamental mistake in the present understanding of physics, this 'blindness' is perfect," says Joe. "There is no way to attack it."

The 'blindness' arises because the user tailors each instruction to the particular state of each qubit, which is only known by the client. Even if the quantum computer or an eavesdropper tries to read the qubits, they gain no useful information. (According to quantum physics, there is randomness in the result of reading a qubit unless the measurement settings are somehow matched to the state of the qubit — which here would require knowledge only the client has, hence the data is protected). Without knowing the initial qubit states, the instructions to the server appear random, as do the results.

Joe and his theorist co-inventors collaborated with Stefanie Barz, Anton Zeilinger and Philip Walther at the Vienna Centre for Quantum Science and Technology at the University of Vienna and the Institute of Quantum Optics and Quantum Information to realise the scheme.

The experimental demonstration used data encoded in photons, the particles of light. Photonic systems are well suited to the task because quantum computation operations can be performed on them, and they can be transmitted over long distances. The researchers successfully carried out two quantum algorithms, each using four qubits, in the blind way. They also individually demonstrated the required building blocks for implementing such blind computation on a much larger scale.