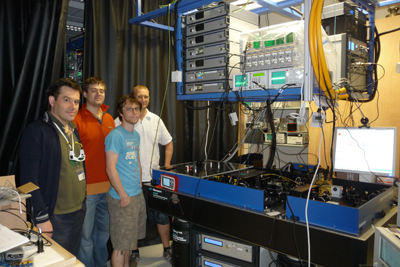 In the ground-floor labs at CQT, researchers are putting the finishing touches to a new shared facility: a setup worth over S$600,000 that will act as a 'boss' for lasers in CQT's experimental labs, keeping each laser's output to a tightly-defined and stable frequency of light.

The setup, comprising an optical frequency comb and related elements, will improve some existing experiments and make new ones possible. For example, in CQT's Quantum Matter lab headed by Principal Investigator Kai Dieckmann, the comb will be used to implement a cooling scheme for ultra-cold molecules known as stimulated rapid adiabatic passage (STIRAP).

"Not every laser cooling lab has a frequency comb. It makes you able to compete with the best," says Johannes Gambari, a Research Fellow in Kai's group. Johannes will manage the comb, and he has been installing and fine-tuning the setup since the equipment arrived in July. This week he is adding one of the final pieces, an optical cavity to stabilise the comb.

CQT labs use lasers to manipulate, measure and contain quantum systems comprising atoms, as well as in experiments exploring the quantum behaviour of light. Experiments are typically designed to operate at specific frequencies of light, corresponding, for example, to the transition of an atom between two energy levels. Checking and stabilizing the output of a laser to match the frequencies required is a technical challenge the new facility will solve. The planned STIRAP-based cooling is a case in point: for this to work, two transitions need to be driven by a pair of lasers that have relative frequencies defined to kHz precision.

A frequency comb is also known as a 'super continuum source' of light – meaning that it produces light across a broad range of frequencies. This 'rainbow' of light (see picture) is generated from a 70-femtosecond pulsed laser broadened by honey-comb hollow optical fiber. Viewed up close, the rainbow is not continuous but looks like a comb: it comprises millions of needles spaced by frequency intervals of 250MHz. The spacing between the needles is controlled with very high accuracy, making the comb an ultra-stable tool for frequency measurements. The rainbow of light produced by the frequency comb is made of millions of sharply-defined lines of colour. Image © Daniel Oi

The needles of the comb function like the markings on a ruler. To perform a frequency measurement, laser light is compared against the comb and the 'number' of the closest needle noted. The light's frequency is then measured with respect to that needle, a procedure that is quick and accurate. Optical frequencies are the highest frequencies that can be measured – optical electromagnetic waves oscillate around 1,000,000,000,000,000 times per second. In this sense, the frequency comb is the fastest counter existing. As a result of knowing the laser's frequency in near real-time, it is possible to implement a stabilizing feedback loop, 'locking' the laser frequency to the needle frequency.

A fat snake of optical fibers feeds laser signals from around CQT to interact with the optical comb. Next door to the shared facility, for example, is the CQT Microtraps lab headed by Principal Investigator Murray Barrett. The availability of a frequency reference and lock will "free up time and drastically simplify our setup," Murray says. The group had been using a mechanical system – optical cavities – to stabilize its lasers, which needed checking and adjusting throughout the day. The group also plans to implement a new scheme to detect a trapped ion's quantum state using two coherent frequencies from the comb.

In the second lab of the Quantum Matter group, headed by Principal Investigator Wenhui Li, the comb will be enlisted to help with the creation of Rydberg atoms – cold atoms in an excited state, where they interact strongly with each other. The requirements are similar to those for STIRAP-based cooling: two lasers with a very stable relative frequency. However, the lasers push the atoms up from a low-energy state to an excited state rather than vice-versa. This has to be done efficiently because Rydberg atoms have only a very short lifetime (some 10s of microseconds). Wenhui, who is currently setting up the apparatus for the Rydberg experiment, expects to be using the frequency comb before the end of 2012.