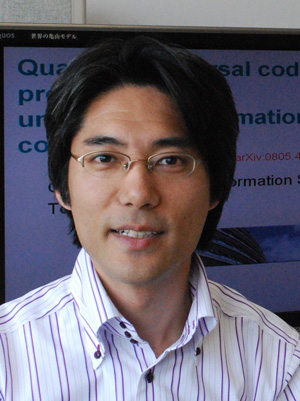 For fundamental work in communication theory, CQT Visiting Research Associate Professor Masahito Hayashi has won the 2011 IEEE Information Theory Paper award. He shares the award with the authors of one other paper.

"It is one of the most prestigious citations in the field of information theory; looking down the list of previous winners is like reviewing the history of information theory itself," says Andreas Winter, the CQT Principal Investigator whose group Masahito works within. Masahito spends around four months per year at CQT.

The information spectrum method had been used in the past to predict the approximate length of channel communication codes. Such codes are designed to transmit information over imperfect communication channels: the code is constructed so that errors up to a specified rate can be tolerated. Practically, it is useful to know how the length of the encoding scales with the number of bits, n, to be transmitted.

Previously the information spectrum method had predicted the leading-order growth of the code (which is linear in n). Masahito's work shows that the method can also predict the second-order term (proportional to the square root of n).

The awards were announced at the 2011 IEEE International Symposium on Information Theory, held 31 July - 5 August in Saint Petersburg, Russia. As well as prestige, the prize is worth US$2000, of which Masahito has won a US$1000 share.

Masahito is an Associate Professor at Tohoku University in Sendai, Japan. In 2010, he won the IBM Japan Science Prize in Computer Science for a different body of work. He says he was surprised to learn that the IEEE Information Theory Society had chosen this channel-coding paper for its prize. "When I listed my top five papers, I didn't use to list this paper. Now that will change," he says.