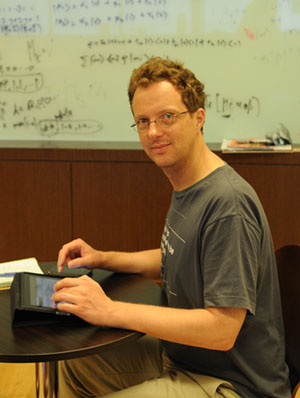 Under CQT's new "Quantum Immersions" programme, the Centre is hosting writers and other creative types who may take inspiration from CQT's research. On 13 October, the Centre welcomed George Musser, staff editor and writer for Scientific American magazine, to be writer-in-residence for two months. CQT congratulates George on winning the American Institute of Physics (AIP) Science Writing Award for 2011. The prize was announced on 14 October.

George (pictured right in CQT's Quantum Cafe) plans to use his residency at CQT in part to work on his second book, which will explore the meaning of "space" given the non-locality of quantum mechanics. He also says the book will explore ideas from quantum gravity.

Non-locality is the property of quantum mechanics that allows particles to coordinate their behaviour with seeming disregard of their separation — two particles on opposite sides of the galaxy can be just as synchronized as two particles on a pin-head.

"In a nutshell, my thesis is that nonlocality, being a failure of our classical conception of spacetime physics, is a window into the deep nature of space and time. My hope is that the book will work on multiple levels. Not only will it discuss the science, it will tell the story of how science is done — how physicists approach this problem and others," says George. The book, provisionally titled Space: The Final Frontier, is under contract with Simon and Schuster. George's first book, The Complete Idiot's Guide to String Theory, was published in 2008.

George met many of CQT's researchers at a welcome reception on his first day. "I'm really excited to be here. It's an incredible group of people that Artur has assembled. In just the few days I have been here, everyone has been so open and patient with my stupid questions," says George. He will be giving a few talks during his residency, starting with a public talk at Singapore's Science Centre on 10 November. For details, see CQT's events listings.

At Scientific American George focuses on space science and fundamental physics. He was one of the lead editors for the magazine's single-topic issue, "A Matter of Time" (published in September 2002), which won a National Magazine Award for editorial excellence, the highest honour in US magazine publishing. Last year, he received the Jonathan Eberhart Planetary Sciences Journalism Award from the American Astronomical Society. His latest award was for the feature "Could Time End?" published in the September 2010 print issue of Scientific American. The article appears online as "The Paradox of Time: Why It Can't Stop, But Must".

For winning the 2011 AIP Science Writing Award, George will receive $3,000, an inscribed Windsor chair, and a certificate of recognition. He joins an illustrious list of past winners.